Helium started as a network solution to wirelessly connect IoT devices without the need for expensive cellular network plans. Their first attempt used a proprietary radio protocol embedded in sensors. When that did not succeed Helium created their own blockchain, with its own crypto token that rewarded coverage providers for setting up and hosting low-power, radio frequency hotspots in their homes and businesses. The result is a worldwide network that lets IoT smart devices transmit data at a fraction of the cost required by cellular networks.

Helium didn’t start as a cryptocurrency organization. Its operations started in 2013 as a ‘long range, peer-to-peer wireless network’ by persuading people to set up hotspots and string them together. In 2019, the founders decided to let users build the network themselves and be rewarded in cryptocurrency.

Helium is now a blockchain network for IoT devices. Helium mainnet facilitates the interaction of low-powered wireless devices with each other. The network can also send data across to all nodes or ‘Hotspots.’ Each hotspot combines a wireless gateway and a blockchain mining device. These hotspots roughly cost around $500 and can send small amounts of data over long distances via radio frequencies. These hotspots are 200x more powerful than conventional wifi-hotspots and can share their network’s bandwidth with nearby devices, including parking meters, smart kitchen appliances, or air quality sensors connected to the internet.

All the users who set up these hotspots are rewarded for participating in the network. The users mine and earn rewards in the Helium token – the blockchain’s native cryptocurrency.  The network operates on Proof-of-coverage consensus. Under this protocol, the network attains consensus when the connection quality is highly variable.

The HNT token is the native cryptocurrency on the Helium network that can be mined. It fuels incentivization on the platform. HNT rewards are allocated as per a changing growth plan under which the node owners can earn more for building the infrastructure with more rewards later on for transferring device data. This adjustment mechanism will last for an estimated period of 20 years.

HNT’s current circulating supply is 110 million and is currently ranked among the top 50 cryptocurrencies by market cap.

One HNT token is priced just above $30 currently, post an increase of 8% today. It has recently broken down from a support trendline that held it for about a week. 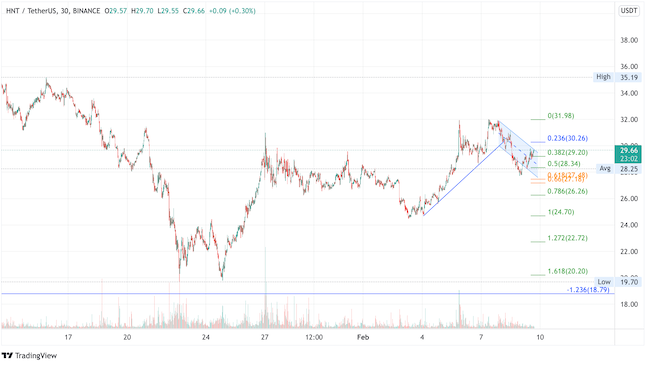 Now it trades in a narrow parallel channel and is headed to the golden pocket support of its rise at $27.5 and $27. This low time frame level is expected to hold and provide fuel to beat resistance above at $32. Post that, HNT will need to content with resistance at $35, which if overcome, can result in a considerable rally.

The Helium Network is accessible to anyone globally. Helium has been there on the IoT scene since 2013, and ramping up the IoT communication for the future while eliminating the inadequacies in the current infrastructure. Companies such as Lime use the Helium network to keep a tab on its connected scooters, while Victor mousetrap company uses it for its new range of internet-connected traps. Currently, more than 500,000 Helium hotspots exist worldwide, and more are being added to the network each day in thousands. As a pioneer in blockchain-driven IoT, Helium can scale quickly and become a top 20 crypto platform in the future.

Disclaimer:This article was authored by Giottus Cryptocurrency Exchange as a part of a paid partnership with The News Minute. Crypto-asset or cryptocurrency investments are subject to market risks such as volatility and have no guaranteed returns. Please do your own research before investing and seek independent legal/financial advice if you are unsure about the investments.

Original article can be found at;//www.thenewsminute.com/article/helium-people-powered-network-160805

The Best Helium (HNT) Crypto Wallets in 2022 for Hodlrs, Miners and Traders